My name is Ruben Rodriguez, and I had the great pleasure of doing a summer internship at NaviPlus in Tokyo, Japan. A little bit about myself: I’m a German citizen, and currently pursuing an undergraduate degree at Stanford University in California, USA. As an elective in school, I have been studying Japanese for two years, and took advantage of the Stanford study abroad program. In terms of interests I’m very interested in science and technology, as well as languages, making this internship particularly appealing.

Besides my academic interests, I’m very passionate about soccer, love cocktails, and am a big fan of eating out and trying to cook delicious food. 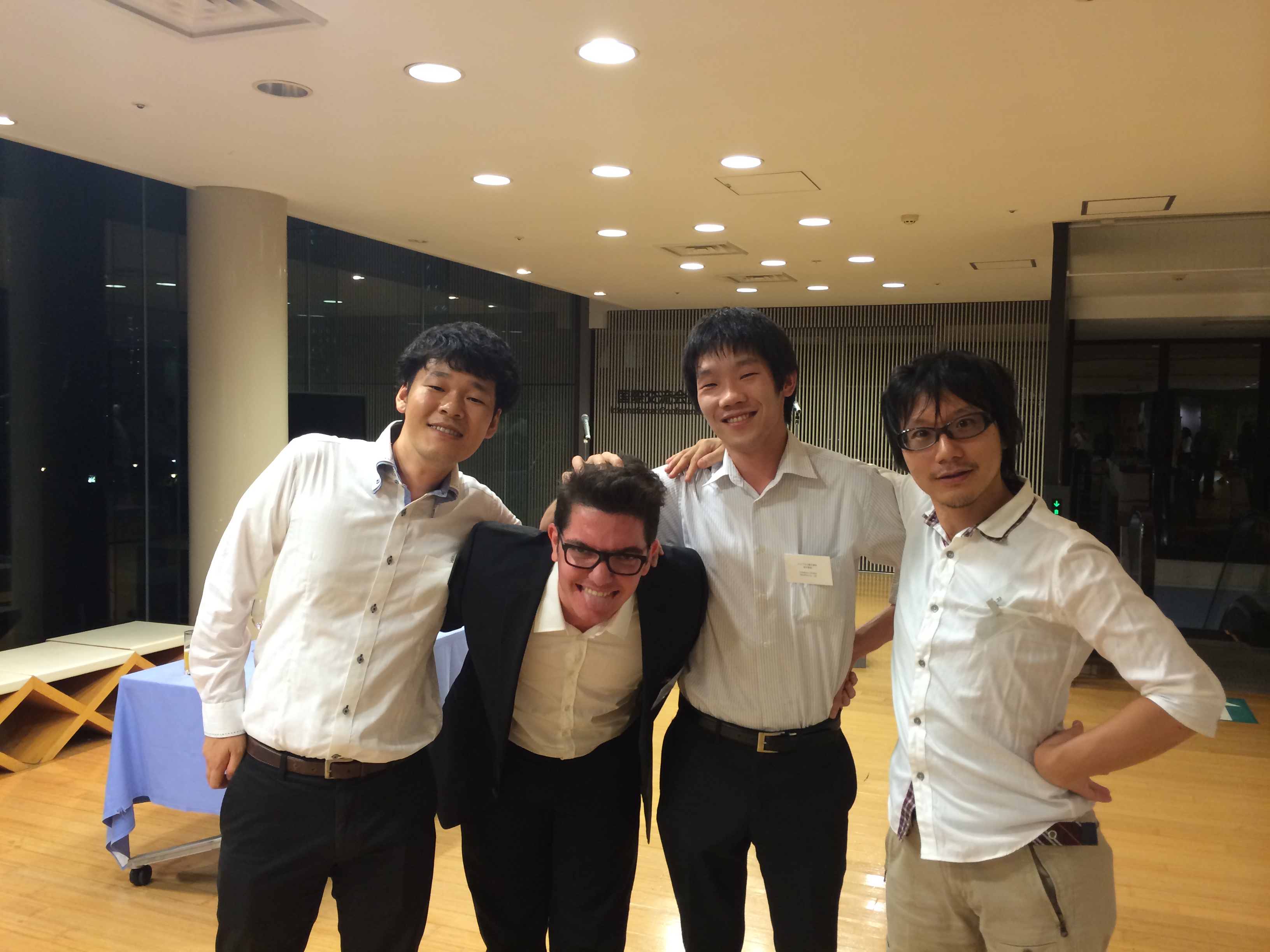 At Stanford, I currently pursue an undergraduate degree in Management Science and Engineering, and want to continue onto a Master’s Degree in Computer Science – Artificial Intelligence.

Specifically, the ideas of big data, machine learning, and data processing fascinate me. I believe we (as in, humanity) have become very apt at collecting a large, incredibly complex amount of data. Tracking is not the issue anymore. If we look at the capabilities of our cellphones, even wearable tracking devices, electronic payment methods, just to name a few, it becomes apparent that tracking in itself is easily achieved nowadays, which is amazing for the vast amount of data it provides us with. What I don’t think we are yet amazing at, is processing the tracked information into useful data, recognizing patterns, and distilling the useful parts out of the information. That is the field that fascinates me the most in computer science, and that I want to pursue a career in.

At NaviPlus I had a very wonderful 10 weeks of an internship, and would like to talk about it more in detail. The first week set the tone, on many levels. I was greeted very nicely, and promptly taken to lunch to taste (upon recommendation form a co-worker) my first Japanese curry. The rest of the week was spent figuring out the project I would pursue for the summer. This was done with meticulous attention to detail. Not only did the company adapt perfectly their expectations to my skill levels, they also took the time to walk me through their products and concepts for several hours. Afterwards, I was given ample time to do my own research and see where I would find myself, and where my interests would lay. To top off the first week efforts, upon recognizing that the provided computer would not be able to meet my needs fully, they swiftly gave me a perfectly adequate computer

My project was planned and decided to be an implementation of my own recommendation algorithm based on several cornerstones:

The way the project itself worked out was amazing. The company gave me the freedom to develop it myself completely, but also me the necessary support, guidance, and insight whenever needed. A good example is the initial feature-vector creation. My original plan was to create the first vectors manually for testing purposes, and only later to automatically generate the vectors. After my co-workers showing me how manual vector creation has many downsides, like non-standard creation, speed issues, and difficulty of scaling, I decided to make the automatic creation the first priority. It turns out the effort was not considerably longer than creating two or three manual vector sets, and it ultimately sped up my development process considerably.

I continued following the road-map that we developed during week one and making adjustments throughout with meetings once a week on Fridays to check progress, realign the project and receive feedback from the people at NaviPlus. And while those meetings were sometimes difficult to communicate because of my low Japanese levels, my coworkers made every effort for us to be able to communicate: from having a dictionary on the wall projected, to drawing extensive diagrams, to coming up with creative examples to get ideas across. I used the data to test the system both in functionality and in logic. For instance, recommending completely random and unrelated items made little sense, and developing a logic that would, without human input, recognize how to cluster items, and how to recommend them, required data to test and tweak. The visual and information feedback here was crucial. 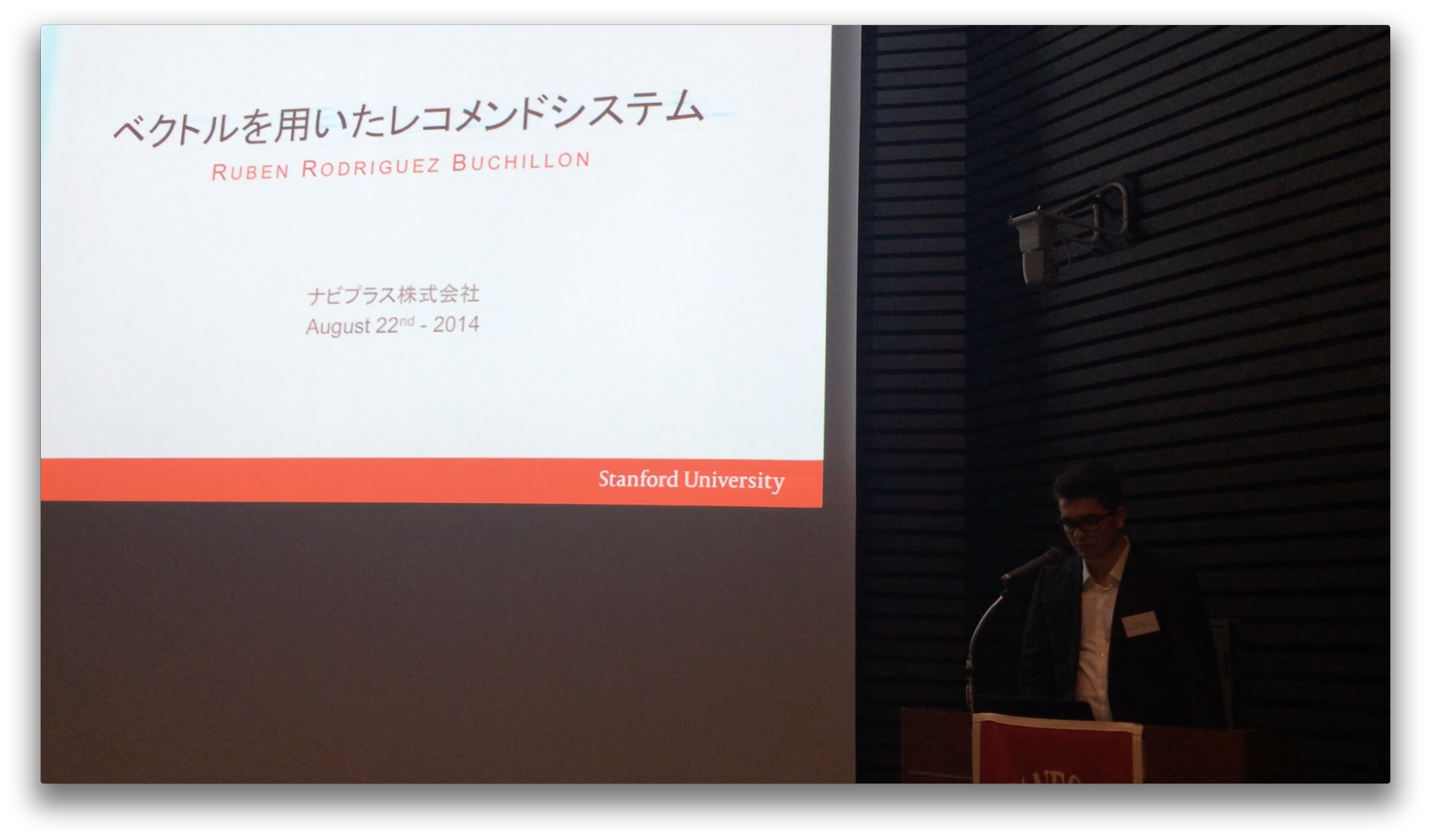 NaviPlus reminds me a lot of a California start-up in the way the company is set up, the hierarchy within the company, but mostly the climate at work. We all share a big office, instead of cubicles, and while everyone treats their co-workers with a lot of respect, there is no apparent difference in the way people interact with juniors or seniors, in terms of treating them equally, taking them serious, or having a good conversations. More so, the general climate is very relaxed, albeit focused, as one would expect from an IT company.

Another point that left a big impression on me is the willingness of co-workers to help out, and provide support for each other. Especially with me, the language barrier (Japanese) is a big problem, but that did not stop my co-workers from finding articles in English for me, scrolling through pages of dictionaries to understand me, or simply trying to rephrase several times, until I could understand. I never felt that my low level of Japanese was a burden in the internship process. I felt like the internship helped me improve my Japanese language levels quite a bit.

Additionally, I would like to remark the attention to detail that NaviPlus has ingrained into their structure. On the first day, my desk not only had a computer, but also a notebook, pens, two keyboards to choose from, face tissues, post-it notes, and a guide to get started on every account from email to redmine etc. The list may seem normal, but the crucial part is everything was well thought-out; nothing was superfluous. I wasn’t given binders and organizers, unnecessary clutter, or complications, but simply the things that I would need. Whenever we would have meetings, a German (I guess in this case Japanese) punctuality would be in place, with meetings starting exactly when planned, people being ready, and everything going smoothly.

The company has a very good climate between the workers where the relationship goes beyond the office usually. This contributes to a great atmosphere and teamwork. It’s difficult for me to judge what the interactions are like without having a foreign intern, and maybe they were more geared towards me during the internship, but what stands is the fact that many nights I spent with my co-workers either eating out, doing sports, or having a small party at the office itself. We even ended up going on a weekend trip to a Sake factory. This made working at NaviPlus a lot more enjoyable than it already was. I never felt like I was lonely in Tokyo, but rather had friends from the get-go.

NaviPlus is a wonderful mix of California’s relaxed start-up culture, with the Japanese way of handling a company, from attention to detail, over punctuality, to dedication.

On Living in Japan

Living in Japan on your own for the first time is an adventure, and Google Maps and Translate certainly are your best friend for the time being. Japan certainly has an interesting culture of respecting everyone’s choice of actions in public and private, which can be a both a blessing and a curse. The blessing part is easily understood, since no one is going to judge your actions, question why you choose to eat on the train, or anything like that. The curse of course, is that it’s difficult to learn the culture and customs if no one points things out to you, or corrects you. Let me illustrate with an example. I was not aware of the general ban of talking on cellphones in the trains. And it wasn’t until I did so for the 3rd time, and I saw people look at me rather unfriendly, that I looked it up. No one pointed that out to me, or asked me to get off the phone, but they expressed their displeasure with their looks. Could I have continued talking? Probably, and no one would have stopped me or complained. That’s why assimilating into Japan and living here has a lot to do with observing and understanding the unspoken rules.

I would say my biggest difficulties were orientation in Tokyo, and speaking Japanese in a business – computer science – kind of set-up. I would like to elaborate on some takeaways, as well as how NaviPlus handled this.

The company provided housing for me, and transportation, which took the edge off in the beginning. That being said, finding your way around still proved very difficult at first. While my co-workers were always helpful whenever they could, for instance going with me to buy my first bottle of shampoo, there are things (most things) that you have to figure out yourself. For those cases, nothing worked better for me than exploring by walking around, and asking. The risk of sounding stupid or making mistakes is irrelevant compared to the prospect of thinking you purchased shampoo when in reality you purchased laundry detergent.

As far as communication in Japanese goes, it’s a struggle that everyone will have to go through in their specific fields. While there are a lot of katakana words especially in computer science in Japanese, there are even more Japanese words that are frequently used. The way that I was able to go about this, was by using a combination of dictionaries, Wikipedia’s language switching, as well as drawing diagrams etc. and being able to call on patient co-workers that were willing to negotiate the meaning of every word until I understood them 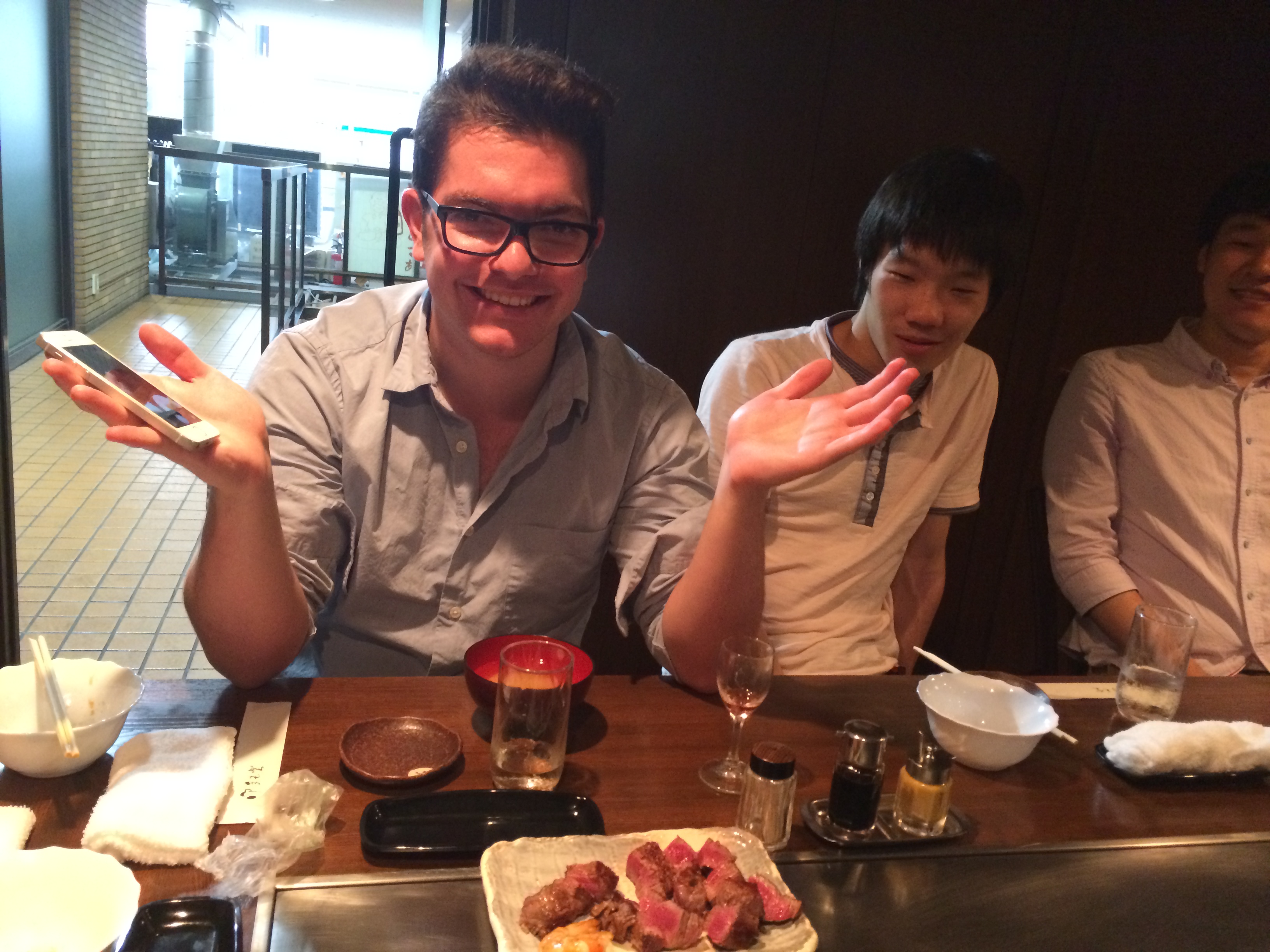 All in all I’m very grateful and happy for my internship at NaviPlus because it helped me develop further both professionally, but also as a person. I was given the chance to plan my own project and oversee it, aside from learning a different working culture, being able to call on excellent knowledgeable co-workers, and explore a new county in an unforgettable summer. Thank you so much for reading this blog-post, and thanks to everyone at NaviPlus for making my internship the remarkable experience that it was. 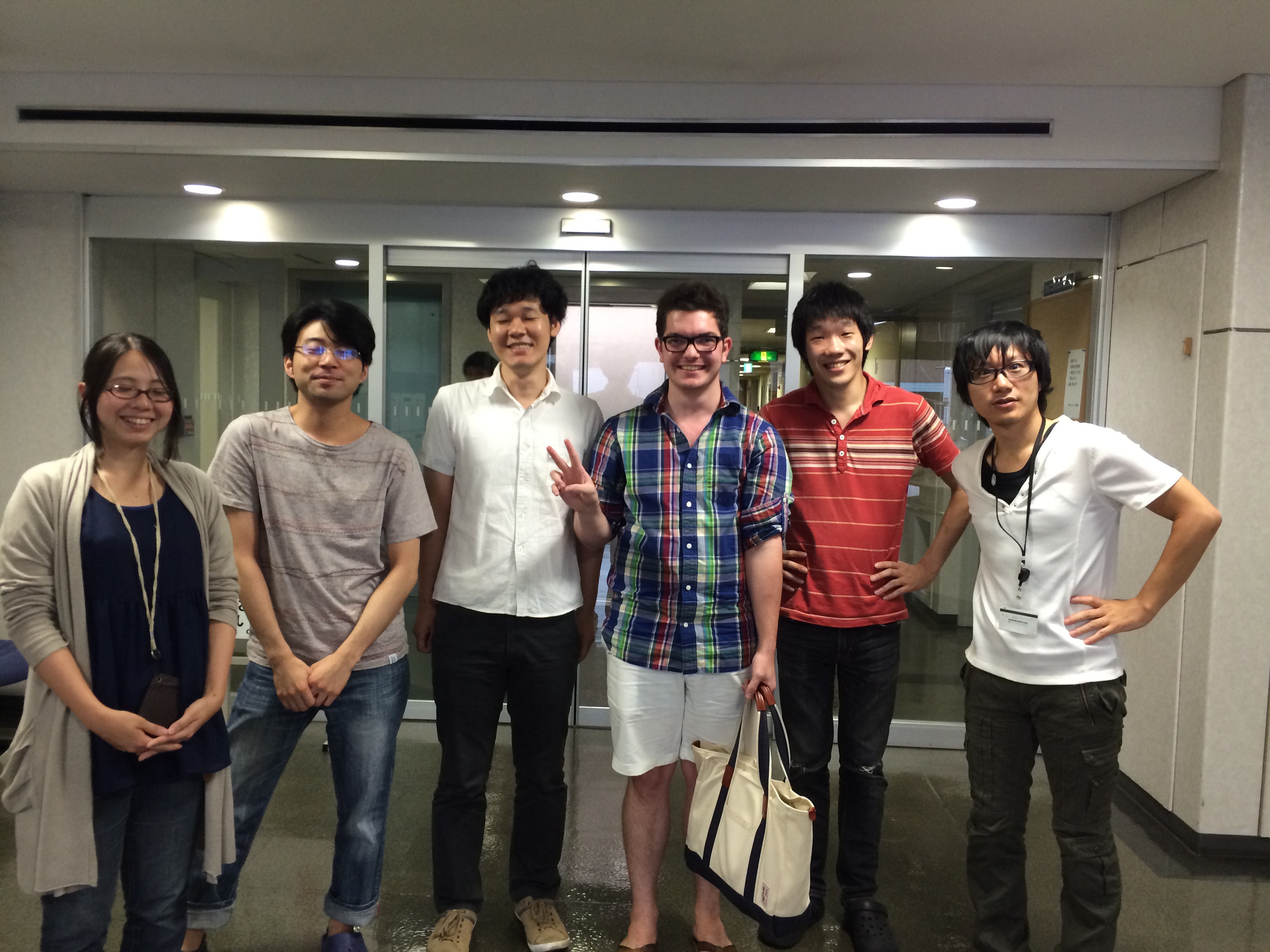